In my younger days I served aboard a submarine. It was a nuclear powered fast attack submarine, the USS Permit (SSN-594), and the years I served spanned early 1983 to late 1986. The Permit (pictured below) was, even then, a relatively old submarine, having been commissioned in the early 1960’s. But the Cold War was still raging. So, like every other submarine in our squadron, we spent plenty of time at sea.

During most of those years, I never gave a second thought to what my shipmates and I were actually undertaking – remaining submerged, hundreds of feet below the ocean surface, for several days, sometimes weeks, at a time; patrolling the waters off our coast; spying on the Soviet navy; hunting and tracking Soviet submarines; the usual Cold War stuff. Near the end of my tour, though, I knew I was not made to be a career submariner. And so, when my enlistment was up, I left the Navy and submarine service.

I have no regrets about my time on the Permit. Most of my shipmates were good, strong, and courageous men. I learned a lot from them – about the Navy, about submarines, about being a submarine sailor, about life. There are times that I miss the comradery one can only have with shipmates. (Oh, knock it off! I mean that in a wholesome way).

There are, however, some things that I do not miss. Not even remotely. While I could chronicle several things, here is a somewhat lighthearted look at 6 things that top my list. If you’re a submariner (current or former), I am very interested in items that would make your list, and that differ from mine.

The Smell
Unless your olfactory nerve has been stimulated by the internal environment of a submarine, you simply cannot understand. The odor is unique. To me, it seemed a mixture of oil, metal, and stale air. A major contributor to this odor was probably amine, which is a chemical used in the machines that remove carbon dioxide from the air. For the most part, the filtration and air purifying systems do indeed remove the cigarette smoke, body odor, flatulence, and other impurities from the air. But one is never quite sure as to what level. 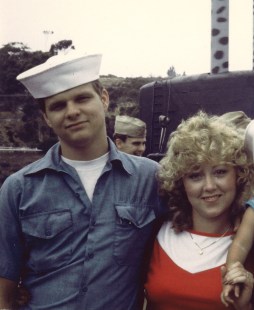 The stench permeated my clothes, my hair, and, according to my wife, my skin. Indeed, and despite the nicely posed picture to the right, I can recall returning to port on more than one occasion and watching my wife pinch her nose in disgust.

Honestly, to this day I have not experienced a similar smell – anytime, anyplace, anywhere.

Sound like fun? If so, please give it a try at home.

Now, however, my wife accuses me of spending an inordinate amount of time in the shower. I blame this on submarine showers.

The Sanitary Tanks
Yes, like others of our species, submarine sailors do indeed urinate and defecate. When a submarine is submerged, it is obviously not connected to a municipal sewage system. So where does all of that waste go? Well, initially into storage tanks or, to use the technical term, sanitary tanks. Unsurprisingly, after some time at sea these tanks become full. After all, these tanks have limited storage capacity, whereas most submariners have unlimited waste-discharge capacity.

Anyway, when the sanitary tanks become full, said tanks must be emptied (see unlimited discharge capacity above). Generally, the process is quite innocuous. The appropriately assigned personnel pressurize the sanitary tanks with air, and discharge the contents overboard to, as we used to sophomorically say, “Feed the fish.” This is known as a sanitary tank blow.

One key step in the sanitary tank blow procedure is for the assigned personnel to hang a sign on each head (nautical term for bathroom . . . you’re welcome) to warn all potential users. Y

ou see, the toilets on submarines (pictured here) are flushed by opening a ball valve, which allows the contents to gently flow, under gravities influence, into the sanitary tank. As you can imagine, if that ball valve is opened when the sanitary tank is pressurized . . . let’s just say it’s not the fish that get fed.

Yes, it did happen. Not to me, but to one of my shipmates. Poor Joe Dwyer. No one hung the sign on the engine room head. To this day, I’m unsure whether this was intentional. Regardless, I can still see his face, covered with “stuff” of varying shades of brown and green. I can still see the bits of paper and “stuff” layered on his lips and lodged in his teeth. Not to mention the smell.

Pizza Night
I like pizza. I think most submariners like pizza. I am certain that every submariner stationed on the Permit liked pizza. Shoot, now that I think about it, “liked” is probably an understatement, given the way my shipmates behaved on pizza night. Let me explain.

When a submarine is underway, meals are generally served four times during each 24 hour cycle – breakfast, lunch, dinner, and “mid rats.” Mid rats are served from just

before, to just after, the mid-watch commences. The mid-watch is the watch section that begins at 12 am. Anyway, mid-rats is generally an uninspiring meal – beans and franks (“beanie-weenie”) or hamburgers (“sliders”) – that does not awake sailors from their slumber to eat. That is, unless it’s Saturday night.

You see, the mid-rats meal on Saturday was pizza. And that meant everyone was up! It was crazy. No, it was stupid. I mean, the pizza was not that good. I still recall the line extending from the crew’s mess, up the ladder (“staircase”), and all the way back to the tunnel (the space over the reactor compartment) door.

Oh, the wailing, the line cutting, the elbowing, the gnashing of teeth. All wrought because of pizza night.

Mid-Watch
As explained above, the mid-watch begins at 12 am. When the boat is in port, a mid-watch for a particular watch station can run either 4 or 6 hours, depending upon how many personnel are qualified to stand that watch station.

No matter the length, there are some in-port watch stations, such as the Shutdown Reactor Operator (SRO) watch station, which are non-roving watch stations. This means you don’t move around (i.e., rove) the boat. Rather, when you stand this watch station you are basically held captive for the entire 4 or 6 hours. That is, of course, unless someone temporarily relieves you of the watch so that, for example, you can “relieve” yourself.

As you can probably appreciate, when the boat is in port and the entire crew is not available, trying to get someone to relieve you during the mid-watch can be, let’s just say, difficult. As you can probably also appreciate, one typically consumes inordinate amounts of liquid caffeine, be it coffee, soda, or both. This, as you can further appreciate, leads to inordinate amounts of urine production. For those standing a non-roving watch station, extreme discomfort can, and likely does, ensue. Thus, one or more of several options is implemented.

Option 1: use a roving watch stander to vicariously and incessantly beg someone to come and relieve you.

Option 2: use a trash can, a trash bag, or any one of numerous other containers having sufficient volume and robustness, to receive and temporarily retain uric acid (and/or other waste product).

I was not a fan of Option 2, though I know plenty of shipmates who were. My first choice was always Option 1. More often than not, however, this option failed me. And so, I typically settled for Option 3.

Thanks to the numerous mid-watch SRO watches I stood, I believe I am able to “hold it” much longer than the average person. Am I proud of this? No. Well, maybe. I mean, everyone should strive to be the best at something . . . right?

Hot Racking
For those unfamiliar with this term, “hot racking” refers to sharing a rack (a bed) with one or more shipmates. No, not at the same time! Well, not when I was stationed aboard a submarine anyway. Hot racking can be (is?), to say the least, a bit disconcerting. Consider that, shortly (or sometimes immediately) before you “hit the rack” for some sleep, another sailor exited that same rack. So the rack you’re about to lie on is not only relatively warm – thus the term “hot rack” – it is also covered in the previous occupant’s DNA. And what form that DNA takes may vary with the previous occupant’s hygiene or other predilections.

Fortunately, by the time I went on my first (and only) extended 6-month deployment, I was senior enough to have my own rack, thereby saving me from this uncomfortable (to say the least) practice. I did, however, have to endure it for a few, relatively short (2-3 weeks) deployments when I was still junior. Unfortunately, my hot racking mates were not all that keenly self-aware of their odoriferous emanations. I remember once, my rack mate was the boat’s most notorious non-showering sailor. Another time, a guy who incessantly smoked clove cigarettes. Delightful. Simply delightful. Though, I am sure if you asked them, it was no picnic for them to share a rack with me .

I’m thankful that since I left the boat in 1986, I have hot racked with only one person – my wife. Fortunately for me, she enjoys showering regularly, and she absolutely despises cigarettes of all sizes, shapes, and flavors.

69 thoughts on “Submarine Life – What I Definitely Don’t Miss”