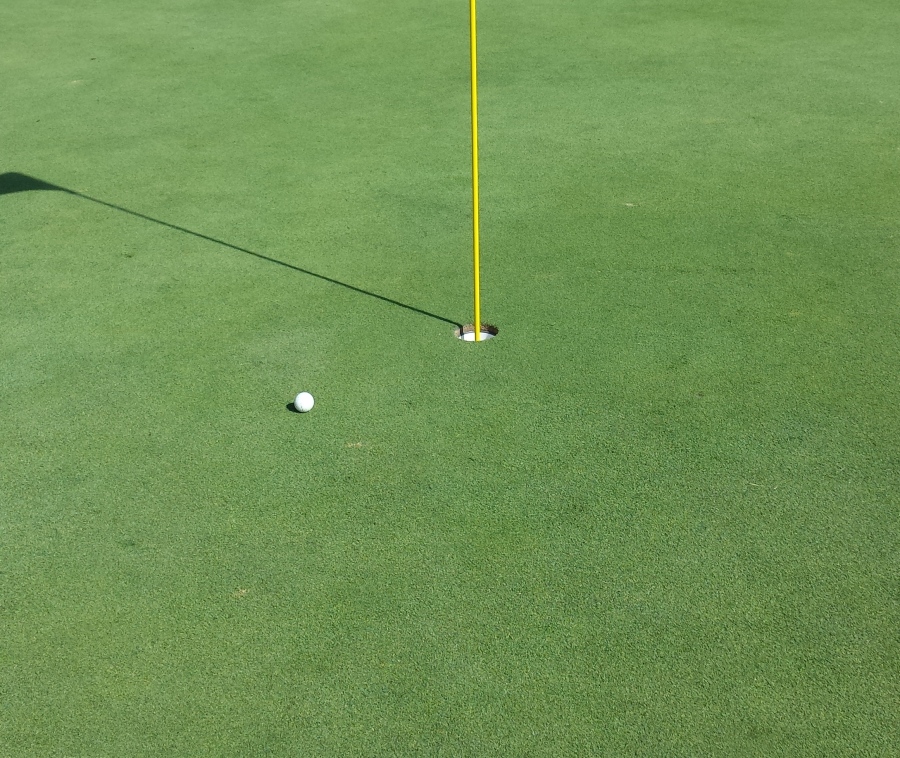 Golf – by far the most challenging sport I have ever played.  It is also, at this point in my life, the sport I most enjoy playing.  I did not play golf growing up.  I thought it boring, stuffy, and even a bit silly.  After all, how much fun can it be to hit a dimpled little ball into a hole in the ground?  Besides, back then (at least in my mind) it was a game the “rich kids” played.

Now, much later in life, I can’t seem to get enough.  If I could golf every weekend, I would.  Shoot, in all honesty, if I could golf every day, I would.  There is something about golf that has gotten inside of me.  I don’t exactly know what that something is, but I do know this:  there are few things as enthralling as hitting a good golf shot; there are few things as discouraging as hitting a bad golf shot (especially when coupled with a cry of “Fore!).

That picture at the top of this post is evidence of a shot that left me enthralled.  The end result of an approach shot from about 140 yards out.  As you can see, I nailed it!  Undoubtedly to no one’s surprise, I have no pictures of a shot that left me discouraged.  There is no need for such evidence.  I’ve made those shots aplenty.

Unfortunately, a good golf shot can also, at times, be a detriment.  A good golf shot can cause overconfidence, which can lead to lapses in concentration and, inevitably, a bad golf shot.  I have, on countless occasions, hit a good golf shot and said to myself, “Alright, I’ve got this.  I know what I’m doing now.  From now on . . . .”  Immediately thereafter, of course, is when that discouraging bad shot comes along.

Now don’t get me wrong.  I am not under the mistaken impression that I, or anyone else for that matter, will ever achieve a flawless golf game.  Even the best golfers in the world will, every now and then, make a bad shot.  They, too, miss fairways, hit their ball out of bounds, and find sand traps.  It’s how they recover from those bad shots that differentiate them from the novice.  You see, it usually takes an especially good shot to recover from a bad one.

I am also keenly aware that all golfers, including professionals, have bad golf rounds (some of us more than others).  I have rounds so bad that I feel like quitting.  During those rounds, I find myself muttering to myself, complaining, at times just downright whining.  But then, seemingly out of nowhere, I’ll hit a good shot, and my outlook immediately changes.  I am suddenly positive.  I am instantly encouraged.  I once again realize that I can play this game, and that this round is merely exposing some weakness I need to work on for the next round.  In an instant, I’ve forgotten all my prior bad shots, and this poor round becomes worthwhile.

A METAPHOR FOR LIFE
Golf, in many ways, is much like life.  At least as I’ve experienced and observed life.  When I take a swing at something and achieve even a modicum of success, I’m encouraged.  I’m empowered.  I’m filled with a confidence that makes me want to continue on, that makes me want to repeat my success.

Nonetheless, just like golf, successes in life can create overconfidence.  We can fool ourselves into thinking that our current success, whether physical, spiritual, or emotional, is somehow prescient of our next.  When this occurs, we set ourselves up, if not for failure, then at least something short of total success – in other words, a “bad shot.”

As a Christian, I am encouraged to “be prepared in season and out of season” (2 Tim. 4:2, NIV).  Although the Apostle Paul wrote this to his young protégé, Timothy, to specifically encourage him to be ready at any time to preach the gospel, I believe it is also a general exhortation to both Christians and non-Christians alike.  We must be prepared.  And not just when we’re feeling good and riding high (in season), but also when we’re feeling badly and are in a rut (out of season).  That, like golf, requires concentration.  It requires dedication.  It requires persistence.

Also like golf, success in life is not guaranteed.  Failure is inevitable; indeed, failure is unavoidable (John 16:33).  Even those we respect and admire because of their successes in life will, if they are honest, admit to failures.  They will admit to making some “bad shots.”  Often, it’s what these people did to recover from failure that separates them from the crowd.  So too, what matters is what you and I will do to recover from our bad shots.

I have also experienced “rounds” in life that I did not want to finish.  Perhaps you have, too.  Maybe you’ve begun a new career, or the parameters of your job have changed, and you find yourself hitting a lot of bad shots.  Let me encourage you to not quit the round you’re now playing.  At some point in the round you’re going to hit that one shot (maybe even more) that is going to make it all worthwhile.

When it comes to golf and, more importantly, to life, I don’t want to remain static.  I want to improve.  I want to get better.  I want to be prepared – both in season and out.  I know that with each undertaking, a previous success is no guarantor of current or future success.  But with concentration, dedication, and persistence, I am assured that success, and the concomitant elation, is more likely.

So, remember that 140 yard approach shot?  I had to put the thrill of that shot behind me when I reached the green.  After all, my next shot was a putt for birdie.  I needed to refocus, and concentrate only on that shot, not the one before or the one thereafter . . .

Yes.  I sank the putt.  Talk about elation!